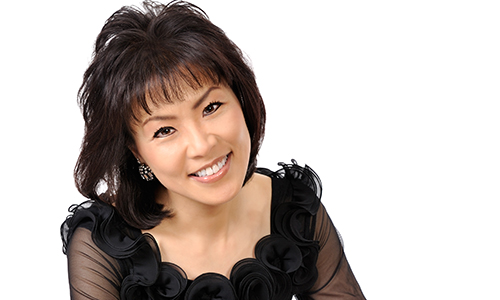 Noriko Ogawa has achieved considerable renown throughout the world since her success at the Leeds International Piano Competition. Noriko’s “ravishingly poetic playing” (Telegraph) sets her apart from her contemporaries and acclaim for her complete Debussy series with BIS Records (“If you like your Debussy to sound like the musical equivalent of a chilled white wine, Noriko Ogawa is the pianist for you” Roger Vignoles, BBC Radio 3, CD Review), confirms her as a fine Debussy specialist, and her Images Book I and II were chosen as the top recommendation ‘exquisite delicacy’ by Stephen Walsh, BBC Radio 3’s CD Review, January 2014. Noriko’s next recording for BIS records is of solo piano music by Eric Satie.

Noriko appears with all the major European, Japanese and US orchestras including recent and forthcoming performances with the Polish National Radio Symphony Orchestra, Tchaikovsky Symphony Orchestra of Moscow Radio, BBC Philharmonic Orchestra, Czech National Symphony Orchestra and the Nagoya Philharmonic Orchestra, as well as the BBC Symphony Orchestra for the world premiere of Richard Dubugnon’s Piano Concerto. Noriko made her BBC Proms debut in August 2013 with the BBC Concert Orchestra (conducted by Barry Wordsworth) and appeared again in 2014 with the Endymion Ensemble. She has been appointed Vice President of the St Cecilia Orchestra in Ripon, Honorary Patron of the Ipswich Orchestral Society and, from January to June 2012, was the Artistic Director for the Reflections on Debussy Festival, hosted by BBC Philharmonic and Bridgewater Hall. In 2015 she continued her relationship with the Bridgewater Hall as Associate Artist for Ravel and Rachmaninov Festival alongside Peter Donohoe.

Noriko is also renowned as a recitalist and chamber musician. Notable chamber projects include a tour of Japan with the Berlin Philharmonic Wind Ensemble and the leader of the Vienna Philharmonic, Rainer Honeck. With her piano duet partner Kathryn Stott, Noriko has performed Malcolm Arnold’s Concerto for Two Pianos (Three Hands) at the 2013 BBC Proms, has toured in Japan and given premieres of Graham Fitkin’s double piano concerto Circuit. Noriko has also collaborated with Steven Isserlis, Isabelle van Keulen, Martin Roscoe, Michael Collins and Peter Donohoe.

In Japan, Noriko acts as artistic advisor to the MUZA Kawasaki Symphony Hall in her hometown. In 1999, the Japanese Ministry of Education awarded her their Art Prize in recognition of her outstanding contribution to the cultural profile of Japan throughout the world and she has also been awarded the Okura Prize for her outstanding contribution to music in Japan. As a writer, Noriko has completed her first book (published in Japan) and her Japanese translation of Susan Tomes’s book Out of Silence – a pianist’s yearbook has been reprinted due to popular demand, with the Japanese music magazine Ongaku no tomo saying “Ogawa translates Tomes’ elegant composition into very beautiful Japanese with deep empathy and affection” (August 2012).

Noriko is passionate about charity work, particularly after the earthquake and tsunami which devastated Japan in early 2011. Since the earthquake she has raised over £40,000 for the British Red Cross Japan Tsunami Fund and is keen to keep fundraising. Noriko also founded Jamie’s Concerts a series for autistic children and parents and is a Cultural Ambassador for the National Autistic Society.

Noriko lives with her partner Philip and their cat Sox. When not practising she enjoys writing and cooking for friends.