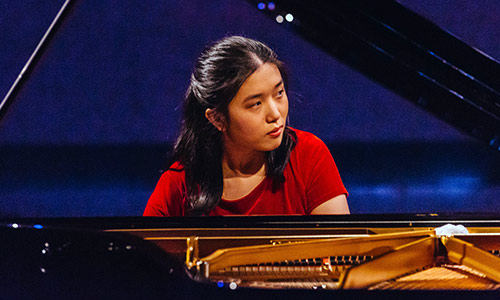 At the age of 16, Lauren Zhang won the BBC Young Musician Competition performing with the City of Birmingham Symphony Orchestra to widespread critical acclaim. Highlights since then include her debut at the BBC Proms and appearances as soloist with the London Mozart Players, European Union Chamber Orchestra, China National Symphony Orchestra and Sinfonia Varsovia Orchestra in Warsaw.

Over the last year, Lauren has performed in the Tonhalle in Zürich and at Klavier-Festival Ruhr. She gave recitals across the UK, as part of the Ryedale, Lichfield and Wooburn Festivals, amongst many others. Her performances have been broadcast live on BBC Radio 3 and 4, TVN24 in Poland, and Deutschlandfunk in Germany. She also attended the Verbier Festival Academy and was accepted to the Curtis Institute of Music.

In 2020, Lauren makes her debut with the Adelaide Symphony Orchestra in Australia and with the Orchestra of the Swan, BBC Scottish Symphony Orchestra and Brno Philharmonic. She gives recitals at Nottingham Royal Concert Hall, Birmingham Town Hall, the Herkulessaal in Munich, at Schleswig-Holstein Musik Festival in Germany, and Sydney Town Hall.

A current pupil of King Edward VI High School for Girls, Lauren began piano lessons at the age of four in the US with Madeline Ignazito. Since moving to the UK, she has studied with Dr Robert Markham in the Junior Department at the Royal Birmingham Conservatoire and also began taking lessons with Professor Christopher Elton since 2017.

Lauren is grateful for the support of YCAT through their aftercare scheme for BBC Young Musician finalists.