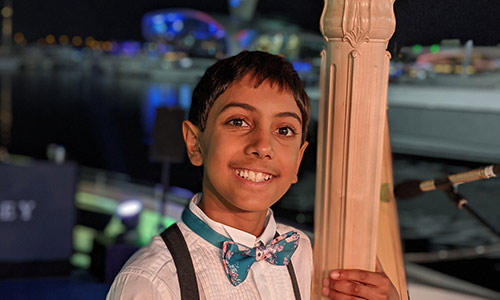 Jamaal Kashim is 13 years old, a harpist at the Royal College of Music Junior Department (RCM JD), studying with Professor Daphne Boden.  He has won numerous prizes at music festivals and other competitions.  This includes both the audience and judges prize at the Silk Street Sinfonia Young Soloist Competition, Junior Musician of the Year at Woking Music Festival twice, Chamber Musician of the Year with his sister Imaan at Woking Music Festival twice, the RCM JD Gordon Turner Harp Prize twice and runner up at the RCM Concerto Competition in 2019.  Jamaal was also awarded the inaugural Junior Musician prize, again with sister Imaan by the Lord Mayor of the City of London in 2019.

Jamaal has been principal harpist with the National Children’s Orchestra of GB for the last 5 years, and with the Chineke! Junior Orchestra.  He was also a member of the National Youth Harp Orchestra for many years.  Jamaal has performed as a soloist and with orchestra widely, including at the Royal Festival Hall, Menuhin Hall, Birmingham Town Hall, Queen Elizabeth Hall, Vinters’ Hall, Hawth Theatre and in Germany.