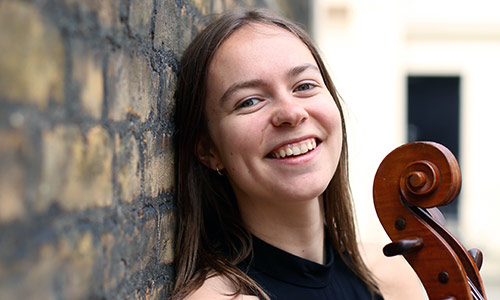 Laura MacDonald is a final year scholar at the Royal Academy of Music studying with Felix Schmidt. She previously studied at the Royal College of Music Junior Department with Michal Kaznowski. A former member of the National Youth Orchestra (NYO), the National Children’s Orchestras, she has played at many of the UK’s major concert halls. More recently she performed as part of the BBC Proms Youth Ensemble at the Last Night of the Proms 2016. Laura is also a passionate chamber musician having attended Pro Corda chamber music school from a young age which included performances at the Wigmore Hall. More recently she has formed a piano trio, the Torridon Trio, with fellow Academy students.

They have given concerts in the Academy and venues in London, and receive coaching from Ian Brown and Levon Chillingirian. They have recently been selected to perform in the ‘ For Crying Out Loud’ chamber music series at the Wigmore Hall. Her recent solo performances have included solo recitals in the Elgar Room at the Royal Albert Hall and at the Riverhouse Barn, Walton-on-Thames. In March of 2015 she performed Tchaikovsky’s Rococo Variations with the Woking Symphony Orchestra and went on to perform it again in 2016 with the Abbots Langley Orchestra. She first performed Elgar’s Cello Concerto in a special fundraising concert for Guildford Cathedral in July 2015, and also in April of the same year with the Outcry Ensemble. In November 2018 she performed Dvorak’s cello concerto with Canterbury Symphony Orchestra. Most recently she was awarded an award from the Una Clark Competition from the Guildford Symphony Orchestra and performed the 1st movement of Dvorak’s cello concerto with the orchestra in January. Laura has performed in masterclasses with Steven Isserlis, Raphael Wallfisch, Alexander Baillie and Colin Carr.