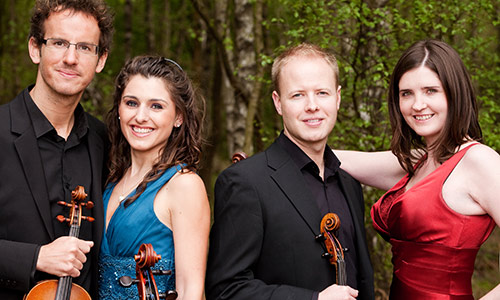 Described by The Strad as presenting “a masterclass in unanimity of musical purpose, in which severity could melt seamlessly into charm, and drama into geniality”, the award-winning Carducci Quartet is internationally acclaimed as one of the most accomplished and versatile ensembles of today. Not only mastering the core repertoire, the quartet presents a selection of new works each season and diversifies further with programmes of film music, pop and rock.

Founded in 1997, the ensemble has won numerous international competitions, including the Concert Artists Guild International Competition, and First Prize at Finland’s Kuhmo International Chamber Music Competition. In 2016, they took home a Royal Philharmonic Society Award for their project, Shostakovich15, an immense cycle of Shostakovich’s Quartets performed across the UK, North, and South America with a marathon one-day cycle hosted by Shakespeare’s Globe, London.

The project was accompanied by a recording of the 4th, 8th, and 11th Quartets to which the Quartet added a further volume in Spring 2019 with a recording of the 1st, 2nd, and 7th Quartets, acclaimed by Gramophone Magazine for its “…athletic, upfront performances, clear in texture, forthright in tone and bold in articulation".

2020 started with an immersive weekend-long project, “Beethoven’s String Quartets: Music, Love, Life and Letters” alongside actor Simon Callow, at the Barbican Centre in London, in celebration of Beethoven’s 250th anniversary.

Highly celebrated for their interpretation of contemporary repertoire, the Carducci Quartet has curated many diverse projects and is regularly invited to perform new works. Recent and upcoming premieres include works by Simon Rowland-Jones, Gavin Higgins, Karl Jenkins, Jonny Greenwood and Kate Whitley. In 2015 they curated projects around Philip Glass and Steve Reich as part of the Royal Philharmonic Society Award winning ‘Minimalism Unwrapped’ at Kings Place in London. Their recording of the Philip Glass Quartets, for Naxos, has reached over 6 million plays on Spotify.

Education work is an important element of the Carducci Quartet’s work, earning them a place on the Royal Philharmonic Society Award shortlist for their family concert ‘Getting the Quartet Bug!’. The Carducci Music Trust was set up to support their work in schools and with young musicians. They also perform a number of school concerts each year supported by the CAVATINA Chamber Music Trust.