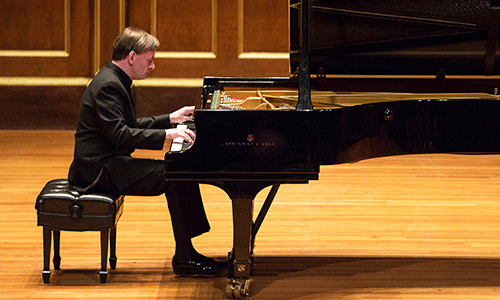 Named by The Economist as one of Twenty Living Polymaths, Stephen Hough combines a distinguished career as a pianist with those of composer, writer and painter. He was the first classical performer to be awarded a MacArthur Fellowship and was made a Commander of the Order of the British Empire (CBE) in the New Year’s Honours 2014.

Hough is a regular guest at festivals such as Salzburg, Mostly Mozart, Edinburgh, La Roque-d'Anthéron, and BBC Proms, where he has made more than 25 appearances. Recitals in 2019/20 spanned the US, Europe and beyond, including performances at the Taiwan National Concert Hall, The Cliburn, a Wigmore Hall chamber residency (featuring Steven Isserlis, Renaud Capuçon, Michael Collins and the Castalian Quartet) and a return to Wigmore in June 2020 to open the lockdown live recital series – Hough’s performance on 1 June marked the first live music broadcast on Radio 3 since 16 March.

Hough’s extensive discography of over 60 CDs has garnered international awards including the Diapason d’Or de l’Année, several Grammy nominations, and eight Gramophone Awards including Record of the Year and the Gold Disc. Recent releases include Beethoven’s complete piano concertos (with the Finnish Radio Symphony Orchestra under Hannu Lintu), ‘The Final Piano Pieces’ of Brahms, solo piano works by Debussy, Hough’s ‘Dream Album’, and a live recording of Schumann and Dvořák’s piano concertos with Andris Nelsons and the City of Birmingham Symphony Orchestra, all for Hyperion Records. His award-winning iPad app The Liszt Sonata was released by Touch Press in 2013.

Stephen Hough’s first novel, The Final Retreat, was published by Sylph Editions in March 2018, and in August 2019 his Rough Ideas: Reflections on Music and More was published by Faber & Faber; he has also written for The New York Times, The Telegraph, The Times, The Guardian and the Evening Standard. Hough is an Honorary Bencher of the Middle Temple, an Honorary Member of the Royal Philharmonic Society, a 2019-22 Visiting Fellow at Lady Margaret Hall, Oxford, a Visiting Professor at the Royal Academy of Music, the International Chair of Piano Studies at the Royal Northern College of Music (of which he was made a Companion in 2019), and is on the faculty of The Juilliard School in New York.