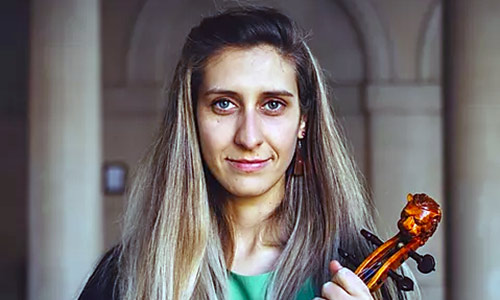 Bulgarian violist, Elitsa Bogdanova commenced her viola studies in 2002 at the National Music School “L. Pipkov” in Sofia. After moving to London in 2007, she completed her BMus (Hons) and MMus degrees at the Guildhall School of Music and Drama, studying with Alexander Zemtsov and Rachel Roberts. During her time at Guildhall, Elitsa developed a keen interest in historical performance, working closely with Jane Rogers and Pavlo Beznosiuk. Elitsa is quickly establishing herself as an active freelance musician, having performed on period instruments with ensembles such as the London Handel Orchestra, Hanover Band, La Nuova Musica, Ensemble DeNote, Orchestra of the Age of Enlightenment.

As the principal violist of La Serenissima, who specialise in Venetian music, Elitsa has performed in Italy, Malta and a number of major venues and early music festivals in the UK. On the modern viola, Elitsa has worked with the London Symphony Orchestra, London Sinfonietta and Sinfonia Cymru. She is also a member of 12 Ensemble who recently recorded their debut album and performed at the Paris Philharmonie. As a member of Camerata Alma Viva, Elitsa has taken part in residencies in Spain and Switzerland and has performed at the Royal Opera House and toured in the UK, France and Belgium with the Gandini Jugglers' show 4x4: Ephemeral Architectures. This year, Elitsa joined the Consone Quartet who specialise in Classical and Early Romantic repertoire. In March 2016 the group won the Ensemble Prize at the Royal Over-Seas League Competition. In 2013 Elitsa co-created the Bulgarian-based interdisciplinary festival '180°' which features a variety of chamber music enhanced by other arts.