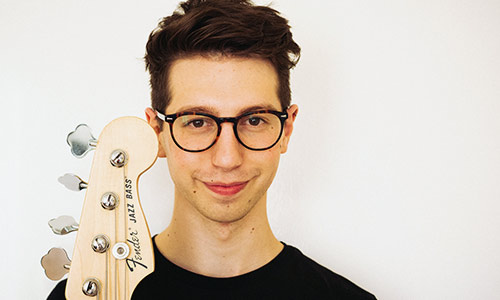 As an in-demand bass player, Sam Becker is equally at home in the studio as he is on stage. He graduated from the Royal Academy of Music in 2018 and has since enjoyed a busy and varied musical career in the classical arena as well as on the pop stage with his own band SUN SILVA. He has performed and recorded for some of the UK’s leading orchestras and artists including Bryan Ferry, the John Wilson Orchestra, the Hallé, Alexis Taylor (of Hot Chip) and the BBC Philharmonic.

Sam’s band SUN SILVA were billed by BBC Radio 1’s Jack Saunders on his UK wide tour “Hopscotch” and their debut single 'Blue Light' featured on the international best-selling game FIFA 19, a game bought by over 20 million people. Their newer releases have been met with critical acclaim; they were featured as ’track of the day’ by Clash Magazine and DIY Magazine described their music as “remarkably assured… propulsive and idiosyncratic’.