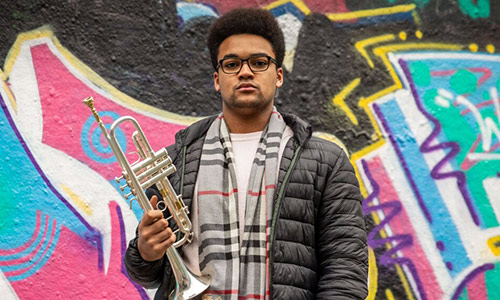 Aaron Akugbo is a versatile and talented trumpet player who freelances with the UK’s leading orchestras as well as having a successful chamber and solo career. Having just finished his Bachelor of Music, with honours, at the Royal Academy of Music, Aaron is currently trialing as principal trumpet with the Philharmonia Orchestra and English National Opera, as co-principal trumpet of BBC Philharmonic Orchestra and as second trumpet with London Symphony Orchestra whilst also freelancing regularly as principal and tutti trumpet with BBC Symphony Orchestra, Ulster Orchestra, Sinfonia of London and Royal Philharmonic Orchestra.

As a soloist, Aaron came joint third in the 2019 Girolamo Fantini International Trumpet Competition whilst also being awarded a special prize for the best performance of the competition commission Vulcano Club by Piergiorgio Ratti.

As part of the Southbank Centre’s ‘Behind Closed Doors’ concert series, Aaron made his London debut at the Royal Festival Hall playing Haydn’s Trumpet Concerto with Chineke! Orchestra, Europe’s first Black and Minority Ethnic orchestra. Aaron made his Wigmore debut playing Saint-Saen’s Septette with Chineke! as well participating in their tour of Europe playing in halls such as the Royal Concertgebouw, Amsterdam and Kölner Philharmonie.