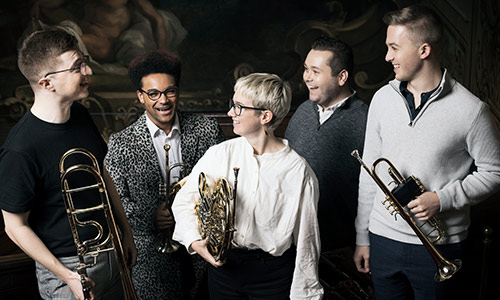 A “thrilling young ensemble at the start of what is sure to be a major international career” (Great Birmingham Brass Fest), Connaught Brass are quickly making a name for themselves as a fresh talent in the chamber music world. Already set to perform at London’s Wigmore Hall and in the Lucerne Festival Debut Series, the ensemble’s ability to manipulate and unify sound earned them 1st Prize in the Inaugural Philip Jones International Brass Ensemble Competition 2019. Vibrant, spirited and bold, Connaught Brass place emphasis on their friendship with one another to showcase their individual musical personalities within a unique collective sound.

Prior to their Philip Jones Competition win, the group won the Worshipful Company of Musicians Brass Ensemble Prize in 2018, and travelled to France shortly after to participate in the music festival Ferrandou Musique, where they performed a series of concerts made up of a vast range of repertoire, including original works for brass quintet and specially arranged vocal and piano works. They returned to the same festival in 2019. More recently, the quintet have become Debut Artists of the Tillett Trust, and have gained a place on the prestigious Britten Pears Chamber Music Residency 2021.

Connaught Brass’s commitment, camaraderie and collective ability shone through on BBC Radio 3’s “In Tune“ programme, where they performed several works and were interviewed live on air. Other notable engagements include recitals at The Great Birmingham Brass Fest, where they performed a new commission alongside Onyx Brass, St James Piccadilly, London, the Investec International Music Festival and at various regional events. Their repertoire is continually expanding and spans 500 years, from renaissance to contemporary works, across a large range of genres. The ensemble also take great pride in undertaking and building their outreach work, including that supported by the Worshipful Company of Musicians.

Having been principal players in the European Union Youth Orchestra and National Youth Orchestras of Great Britain, Scotland, and Wales, members are now appearing on the professional circuit. This includes freelancing with the London Symphony, BBC Symphony, BBC Philharmonic, Philharmonia, Royal Philharmonic, English National Opera and Ulster Orchestras, as well as recording with and supporting artists such as Bruno Mars, Stormzy, Jamie Cullum, Rag‘n’Bone Man, Hazel Iris and Gregory  Porter.

Connaught Brass’ ambition is to explore and share the broadest range of musical repertoire with as wide an audience as possible, bringing brass chamber music to the forefront of today’s musical world.