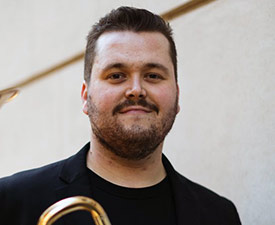 Aled Meredith-Barrett, originally from Pembrokeshire, is a tuba player and scholarship holder currently studying at the Royal Academy of Music (RAM), London, with Lee Tsarmaklis (London Philharmonic Orchestra). He recently graduated with BMus (Hons) from RAM in September 2020.

Aled started playing the tenor horn at the age of 7 and quickly joined the Goodwick Brass youth band. Aled progressed through the ranks and joined the senior band in 2009, winning the 1st section national title in 2015.

Aled has also been a part of the Welsh national ensembles, joining the National Youth Brass Band of Wales in 2014 and the orchestra in 2018. Aled was also a member of the National Orchestra of Great Britain in 2016, as principal tuba of the orchestra, playing in venues such as the Royal Albert Hall and the Symphony Hall, Birmingham.

During his time at the Academy, Aled has been a member of the Symphony Orchestra, Symphonic Brass and Manson Ensemble and is a founding member of Connaught  Brass.

Other than playing the tuba, Aled enjoys supporting the Llanelli Scarlets, watching football and drinking coffee.