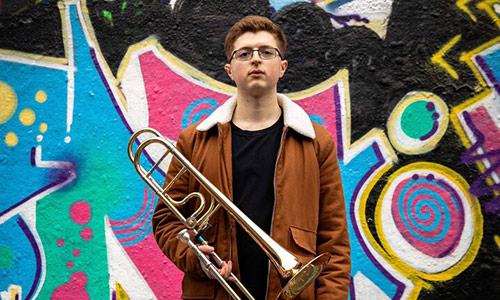 Chris Brewster began playing the baritone aged 7, keen to eventually play the tuba. He quickly moved onto the euphonium and eventually started to play the trombone aged 12.

Having gained a first class honours degree at the Royal Academy of Music, he is now continuing his studies as a Post Graduate student and scholarship holder at the same institution. He studies trombone with Matt Gee, Ian Bousfield and Pete Moore, and euphonium/bass trumpet with James Maynard.

As an orchestral musician, Chris has played under the likes of Edward Gardner, John Wilson, Vasily Petrenko, Sir Mark Elder, Nicholas Collon, Kristjan Järvi and François- Xavier Roth across Britain and Europe. He has been a member of the European Union Youth Orchestra since 2019, which has included a tour across Europe and Oman under Vasily Petrenko, playing repertoire including Bruckner’s Symphony no. 4 and Shostakovich’s Symphony no. 10. Other performance highlights include five televised BBC Proms, multiple live radio broadcasts, and playing on a recording of Holst’s The Planets (euphonium) and Strauss’ Also Sprach Zarathustra (principal trombone) under Edward Gardner for Chandos.

As well as being a founder member of Connaught Brass, Chris is a part of the trombone quartet Bone-afide, winners of the Tunnell Trust Awards Scheme and the International Trombone Association Quartet Competition. Additionally, he enjoys undertaking outreach work and teaching, both privately and for Hounslow Music Service.

When he is not playing and has the time, Chris enjoys to travel the world and see new places. He also enjoys taking a camera to capture moments on these trips, making photography another hobby of his.