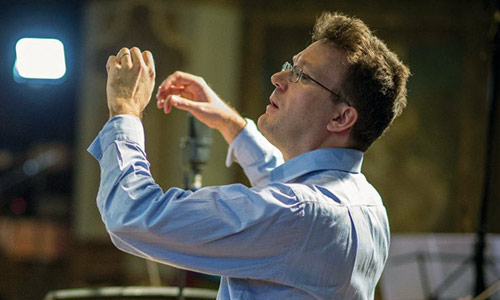 Julian Perkins enjoys a busy and varied career as both conductor and keyboard player. Described as 'exuberantly stylish' by the Sunday Times, he loves bringing his experience as a leading performer on period instruments to his work with both period instrument ensembles and modern orchestras and to singers of varied performing backgrounds. He is Artistic Director of Cambridge Handel Opera and the Founder Director of Sounds Baroque.

Shortlisted for the 2021 Gramophone Award for his recording of Eccles’s Semele with the Academy of Ancient Music and Cambridge Handel Opera, Julian Perkins has been praised as both conductor and keyboard soloist for his 'demonic intensity' (BBC Music Magazine Recording of the Month), 'fluid and natural pacing' (Gramophone Editor's Choice) and 'verve and suavity' (Classical Music), conducting 'as if every bar means the world to him' (Opera Disc of the Month), and giving 'performances that reach to the heart of the music' (International Record Review).

With Sounds Baroque, Julian Perkins has directed many acclaimed performances, working alongside singers such as Rebecca Evans, Dame Emma Kirkby, Mark Padmore, Christopher Purves, Ashley Riches and Carolyn Sampson. The numerous instrumental groups he has directed range from the Academy of Ancient Music to the Northern Chamber Orchestra, while he has led eighteen Baroque projects with Southbank Sinfonia and opera productions for the Buxton International Festival, Cambridge Handel Opera, Guildhall School of Music & Drama, Kings Place, Netherlands Opera Academy, New Chamber Opera, New Kent Opera and Snape Maltings. A unique feature of his work with Sounds Baroque is his co-creation with librettist and critic Stephen Pettitt of carefully crafted pasticcio operas, evolving what was a common eighteenth-century practice for the modern age. So far they have created Casanova (2016) and Dinner with Handel (2021), both received with much acclaim.

Julian read music at Cambridge University, before pursuing advanced studies at the Schola Cantorum, Basle, the Royal Academy of Music, London, and privately with conductor David Parry and harpsichordist Trevor Pinnock. Research is an essential element in his performing career, and his written articles have been published by Cambridge University Press, Oxford University Press and Rhinegold Publishing. Historically informed musicianship also inspires his work as a visiting coach at the Royal Opera as well as the masterclasses he gives for the National Opera Studio, music colleges and universities in the UK and abroad.