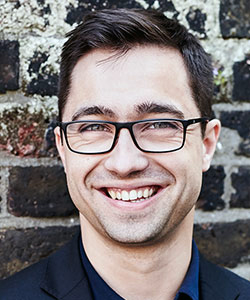 Born in Bulgaria in 1990, Michael Petrov studied at the Yehudi Menuhin School and with Louise Hopkins at the Guildhall School of Music & Drama, where he is now a Fellow.

In 2013 he was selected for representation by Young Classical Artists Trust (YCAT) and in 2014 won the Gold Medal at the GSMD, following a performance of Shostakovich’s Concerto No. 1 at the Barbican. He went on to win the GSMD Wigmore Hall Prize in 2016.

Over the last two years Michael has appeared as soloist with the Philharmonia, Royal Philharmonic, Bournemouth Symphony, City of London Sinfonia, English Chamber and the Barbican Young Orchestras (conducted by Edward Gardner) performing concertos by Dvořák, Elgar, Haydn, Walton and Shostakovich. Other solo appearances include the Munich Chamber Orchestra and London Mozart Players, and in 2013 he performed Prokofiev’s Sinfonia Concertante at the Barbican conducted by Gianandrea Noseda.

Other highlights include recitals at Wigmore Hall, Carnegie’s Weill Hall, the Bath International, Peasmarsh and Plush Festivals. He has also taken part in the Kronberg and Los Angeles Cello Festivals. This season Michael returns to Wigmore Hall twice, makes his debut with the CBSO Youth Orchestra, attends open chamber music at IMS Prussia Cove and gives recitals throughout Europe, and in China.

A keen chamber musician, Michael is a member of the Trio Isimsiz who won 1st Prize in the 2015 Trondheim Competition and have a busy concert schedule.

Michael is grateful for support from the Hattori Trust and a Karl Motesiczky Scholarship funded by the Marie-Louise von Motesiczky Charitable Trust.

He plays on a J B Vuillaume cello (1846) on generous loan from a private individual.