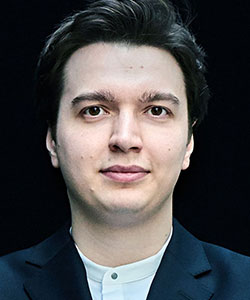 Erdem Mısırlıoğlu started music lessons when he was six. Having completed his undergraduate studies and master’s course in performance at the Guildhall School of Music and Drama, both with first class honours, he has recently finished his Artist’s Diploma there, studying with pianists Martin Roscoe and Ronan O'Hora.

In 2006, Erdem was a prizewinner in the International Rachmaninov Competition for Young Pianists and was also awarded both the Keyboard Instrument Prize in 2006 and the Principal's prize in 2008 at GSMD.

Erdem won the piano section of BBC Young Musician of the Year 2008 and subsequently performed Rhapsody on a Theme of Paganini with the BBC National Orchestra of Wales. In 2011, Erdem was awarded 1st prize in the Beethoven Piano Society of Europe's intercollegiate piano competition.

A passionate chamber musician, Erdem is also a member of Trio Isimsiz, a piano trio formed with friends at GSMD in 2009. The Trio was selected by Young Classical Artists Trust (YCAT) in 2013 and won 1st Prize and the Audience Prize at the Trondheim International Chamber Music Competition. They have a busy concert schedule with recitals throughout Europe and further afield.

Erdem regularly performs across the UK, appearing in venues such as the Royal Festival Hall, Barbican Hall, Snape Maltings, Cardiff Millennium Centre and Wigmore Hall as well as numerous invitations for concerts in Europe and America. He has enjoyed playing to distinguished pianists including Lang Lang, Peter Donohoe, Paul Lewis, Aleksandar Madzar and Stephen Kovacevich.