Madeleine Mitchell is one of Britain's most celebrated violinists, performing in over 40 countries as a soloist and described by The Times as 'one of Britain's liveliest musical forces and foremost violinists'. She has been nominated for Woman of the Year, the European Women of Achievement and the Creative Briton Awards. She will be the soloist in Bath International Festival's Great Brits programme on 31st May 2012 including Vaughan Williams The Lark Ascending and her arrangement of Elgar Salut d"Amour with strings. 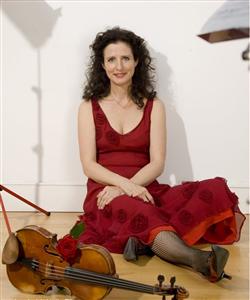 Madeleine Mitchell is well known for her recitals, frequently broadcast for television and on BBC Radio 3, S4C,  ABC (Australia), Bayerischer Rundfunk, National Spanish Radio etc and for imaginative programming spanning most of the standard repertoire as well as pieces written for her by some of the UK"s best known composers. After a recital in Glasgow the Chief Music Critic of the Herald wrote: "Madeleine Mitchell is a violinist in a million. Staggering virtuosity, unparalleled musicianship, her amazing big-toned, sweetly lyrical, vibrantly intense playing is unmistakable..virile Elgar, exuberant Mozart, breathtakingly rumbustuous Dvorak, spellbinding MacMillan written for her." She has just returned from a US tour where she received a standing ovation for her programme of 100 years of British violin music. Mitchell represented Britain in both the festival UKinNY with a recital at Lincoln Center, and for the centenary of Entente Cordiale with France as well as Brazil  where she was widely featured on TV. She has given recitals at Sydney Opera House, Seoul Center for the Arts and Hong Kong - part of a 3 month world tour supported by the British Council, played at many international and most of the major British festivals including the BBC Proms and has collaborated with many renowned artists. In 2010/11  she won an award for her recitals in festivals with Japanese pianist Noriko Ogawa. This Autumn she will premiere a new work for her by David Matthews with strings in the Alwyn Festival in Suffolk and give a concert in Rome for HM the Queen"s Diamond Jubilee. Next Spring sees her returning to the Canberra International Festival as Artist in Residence.

Madeleine Mitchell has performed a wide repertoire of concertos with major orchestras including the St Petersburg Philharmonic, Czech and Polish Radio Symphony, Wurttemberg and Munich Chamber, the Royal Philharmonic and other London orchestras; Welsh Chamber, Orchestra de Bahia Brazil, Malaga Symphony of Spain, Kiev Philharmonic and for the BBC.  She also directs concertos from the violin such as Bach and Vivaldi Seasons and commissioned and premiered a unique 'concerto' for violin and voices by Jonathan Harvey, Roxanna Panufnik and Thierry Pecou at Bath and Spitalfields festivals. She performed Lou Harrison Violin Concerto with Percussion Orchestra in Symphony Hall Birmingham International Series as part of her collaboration with Ensemble Bash, supported by a major award from Arts Council England. Her recording of this and other new works, 'FiddleSticks' on the Signum label, received 5 star reviews in both BBC Music and Classic FM Magazines and was shortlisted for Grammy, BBC Music and Midem awards.

Her burgeoning discography also includes 'Violin Songs' (www.divine-art.com) - popular pieces including Elgar, Massenet and Bridge with Andrew Ball piano and Elizabeth Watts soprano '“featured on BBC Radio 3 and 4 and as Classic FM's CD of the Week: 'a CD full of small joys wonderfully played' (The Strad); 2 albums for Naxos: Alwyn chamber music and the violin works by Howard Blake, accompanied by the composer; 'In Sunlight: Pieces for Madeleine Mitchell' (NMC) - attractive works written for her by many of Britain's best known composers including MacMillan, Nyman, Woolrich, Osborne: 'wonderfully accomplished performances' (Gramophone); 'British Treasures' - early 20th century romantic violin sonatas for Somm, Hummel violin sonatas for Meridian and the widely recommended Messiaen Quartet for the End of Time with Joanna MacGregor which was re-released by Warner last year at the LSO/Gergiev Messiaen concerts at the Barbican.

A highly creative personality, Madeleine devised the Red Violin Festival under Lord Menuhin's patronage in 1997, the first international eclectic festival of the fiddle across the arts, which took place again in October 2007 successfully throughout Cardiff over 10 days with extensive media coverage. www.redviolin.co.uk.

Madeleine Mitchell was awarded the Tagore Gold Medal as Foundation Scholar at the Royal College of Music where she has been a Professor since 1994. As Fulbright/ITT Fellow she gained a master's degree in New York studying with Dorothy DeLay, Donald Weilerstein and Sylvia Rosenberg at the Eastman and Juilliard schools. She gives master classes worldwide, is Director of the London Chamber Ensemble and is on the faculty of the Orfeo International Festival in the Italian Alps.