We welcomed BBC Musician of the Year 2010, Lara Melda, to Breinton on Saturday 13 April for a solo piano recital. She came with an exciting programme of Bach, Chopin, Debussy and Liszt and we had a record  60 guests who, amazingly, all arrived on time and were ready for the 7.30pm start!

Bach's Prelude and Fugue, each written in each of the 12 major and minor keys, offer a wide range of styles. It is unlikely that Bach intended for these pieces for concert performance, but they make a simple and smooth introduction at the start of a recital. And, both Mozart and Beethoven are known to have played them! Lara's choices, No. 4 in C sharp minor and No. 5 in D major, were well contrasted pieces and indeed were a good introduction to the programme that followed.

Her Chopin choices included two etudes, two nocturnes and a scherzo and I enjoyed all of them. What surprised me was that I still made some new discoveries in these familiar pieces which I must have heard many different times by different performers. Lara's interpretations were quite distinctive with a different emphasis, accent and focus from that I've been used to hearing; therefore, she sounded very fresh to my ears. 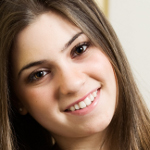 At the age of sixteen Lara Melda won the BBC Young Musician 2010 competition, performing Saint-Saëns Piano Concerto No.2 in the final round, with Vasily Petrenko and the BBC National Orchestra of Wales in Cardiff. The competition had an international following via television and radio broadcasts on the BBC.  Since then she has also performed Mozart Concerto K466 with the BBC National Orchestra of Wales and next season will return to Cardiff to play Beethoven Piano Concerto No 3.