Christopher Brewster performs at Breinton in our Local Young Performers' Soiree on 24 January 2015. 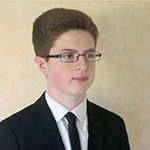