When I heard Ivana Gavrić perform at Wigmore Hall in November 2013, I made the easiest decision there and then; I must invite her to perform to our audience at Breinton. She blew me away with incredibly clear and transparent sounds that I had never experienced.

And what immense pleasure she gave us last night. There was so much more to enjoy than superb musicality and wonderful pianistic skills that she had. Ivana communicated through the music and involved the audience by conveying deep and inner feeling.

The first half of the programme was dedicated to works by Grieg. This brought a Norwegian air and feel, poetic and scenic beauty. Ballade, in the form of variations, was a real gem. Based on a haunting Norwegian theme, every variation was expressive and one after another we looked forward to what would evolve until it completed its journey with a flashback to the first theme. Through her great attention to contrast and style, we heard such subtleness and sensitivity together with stamina and power.

Her programming to sandwich this large scale work between short pieces from Slatter and three Lyric pieces was very effective. Her interpretation and articulation was completely her own and enthusiastically received by the audience. Totally immersed with in the music, Ivana appeared to treasure every moment and every note. Needless to say we loved Wedding Day at Troldhaugen, one of the best known Grieg’s piano works.

The second half consisted of Schubert’s Sonata in A minor and selections from Rachmaninov’s preludes. Ivana explained that Schubert’s Sonata, D. 784 Opus 143, reminded her of Mussorgsky, therefore she liked to combine it with works by a Russian composer. The Sonata’s first movement opened with a rather intense and depressing mood but soon was followed by the most expressive and dreamy second subject; the moods alternate throughout the movement. So involving, so beautiful, and again throughout the beautiful passages such contrast was evident.

Ivana showed real power and excitement with Rachmaninov’s Preludes Op. 23 No. 5 and No. 2, the power which was based on warmth, and never meant to be nor sounded ‘showy’. The beautiful lyrical second movement of the Grieg Sonata was played as encore, and that concluded a fascinating concert. It was wonderful to see many members stay on to chat with this wonderful pianist; they could not go home without showing appreciation for such a joyous evening. 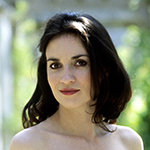 British pianist Ivana Gavric created a sensation with her debut disc In the mists, winning BBC Music Magazine Newcomer of the Year 2011 for ‘playing of an altogether extraordinary calibre’. Her recent third disc of works by Grieg, also on Champs Hill Records, was selected as Editor’s Choice in Gramophone and noted for ‘an electrifying performance’ (BBC Music Magazine). The Grieg Society has voted the CD as its ‘Recording of the Year’.

This season, Ivana has made debuts with the Royal Stockholm Philharmonic with Rafael Payare, as well as with the Grammy-nominated Trondheim Soloists. Previously, she has performed with the Aurora Orchestra, and collaborated with conductors including Ben Gernon, Nicholas Collon and Christian Kluxen. Named Gramophone’s ‘One to Watch’ and BBC Music Magazine’s ‘Rising Star’, Ivana has been heard on the major concert platforms in the UK including The Wigmore Hall, Royal Albert Hall and Royal Festival Hall, as well as across Europe, in Canada, Japan and Russia. Following her US debut in October, the Washington Post described Ivana’s playing as ‘impressive, insightful… a ravishing performance’. Attracting considerable praise for her interpretations of Janacek’s music in particular, Ivana has curated festivals dedicated to the composer’s solo and chamber works.

Also a dedicated chamber musician, Ivana performed with violinist Maxim Vengerov in 2007 as part of Live Music Now, the outreach scheme established by the late Lord Menuhin.  She has partnered colleagues on the concert platform in festivals in the UK and Europe, taken part in the IMS Prussia Cove Open Chamber Music Sessions and is an alumna of the Britten-Pears Young Artist Programme. Outside the concert hall she is featured playing Chopin and Beethoven in BBC2’s adaptation of The Line of Beauty, and Bach in Anthony Minghella’s film Breaking and Entering.

Born into a musical family in Sarajevo, Ivana was initially taught by her mother. Following her move to the UK, she studied at the Guildhall School of Music and Drama Junior Department, University of Cambridge and the Royal College of Music. Her teachers include Niel Immelman, Peter Bithell and James Gibb. Additionally, Ivana has had the opportunity to study with esteemed musicians such as Menahem Pressler, Ferenc Rados, Dmitry Bashkirov, Boris Berman, Stephen Kovacevich and Leif Ove Andsnes.

Forthcoming highlights include recitals at the KKL Luzern and a return to the Wigmore Hall. Ivana is indebted to the support of many trusts, including the Frankopan Fund (Sainsbury Family Charitable Trusts), the MBF, The Solti Foundation, The Nicholas Boas Trust, The Richard Carne Trust and the RVW Trust. Ivana is proud to be an Ambassador for the charity ‘Musicians without Borders’.

‘Gavrić has a great career ahead of her, of that there is no doubt’
THE ARTS DESK, JULY 2010

‘The programme presented by Ivana Gavrić showed the range of this gifted artist admirably…excellently played…a reading of no little stature.’
MUSICAL OPINION