Our formal 2015/16 season has finished after nine wonderful events, which you can read about below. 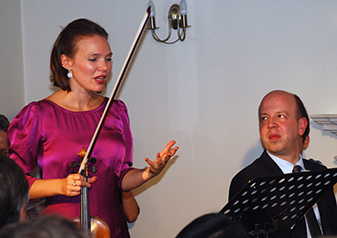 Opening a new season after a long summer break is always makes for one exciting event. Our members’ thirst for good music builds up during the summer and they patiently wait for the start of the new concert season. This year, we welcomed violinist Tamsin Waley-Cohen and pianist Huw Watkins to launch our 2015/16 series. 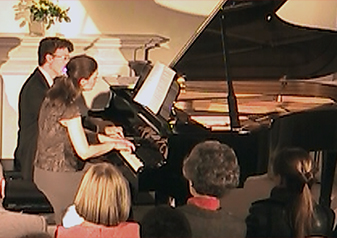 At 4pm on the day before the recital, I received bad news; Hanna Hipp, our mezzo soprano who had been engaged together with pianist Emma Abbate was too ill to perform. My first reaction was “You’ve got to be joking”. The next 24 hours leading up to the recital was a bit chaotic, as you can imagine, but the result was… just splendid! We welcomed two pianists, Emma Abbate and Julian Perkins, for their programme of four hands, ‘A Playful Tournament’. 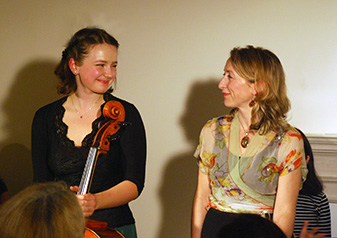 It has been seven years since we started giving recitals at Soirees at Breinton! I remember every musician we have invited; each musician has brought their best programme and given us treasurable moments. Last Saturday, we celebrated the 40th recital with our special guests, cellist Laura van den Heijden and pianist Alison Rhind. It was originally going to be an Evening of Bach which turned into a unique Evening of Concertos. We cannot thank Laura and Alison enough for stepping in at the last moment after the unexpected cancellation.

“I absolutely love what I do and I love my life” says Alexandra Dariescu. We could see and hear what she feels throughout her performance at Breinton last night. Her love and passion towards the piano, performing and sharing her music with the audience was apparent right from the first note, and continued tirelessly until the dramatic ending of Chopin’s Scherzo No. 2. From the subtleness and gentleness of pianissimos to the boldness of fortissimos, Alexandra’s effortless musicality extracted the best out of the piano and dazzled the audience. 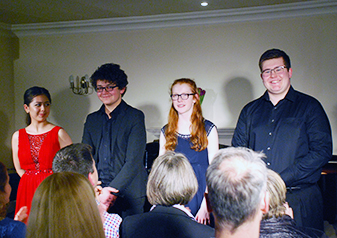 It was a buzzing, exciting and high-spirited evening at Breinton. We welcomed four very young performers: Dylan Price (piano); Katarina Davies (cello); Erika Smith-Gordon (violin); and James Cobb (tenor). Each performed with confidence and own style, bringing out their best for the audience. 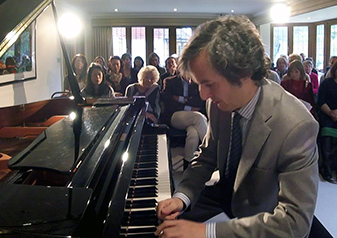 This was our first ‘official’ lunch time concert at Breinton. Unlike a typical lunch-time programme with a duration of less than one hour, Colin Stone and Mayumi Iida gave a full-length performance with an interval. It was a treat for us the audience. 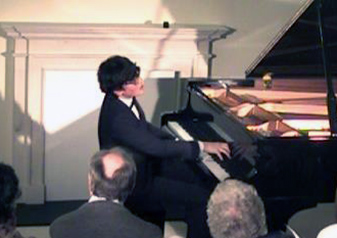 In November 2014, I wrote a glowing review for Martin James Bartlett for a concert he gave at Wimbledon International Music Festival. One year and four months later, here is another one. His recital at Breinton last Saturday was simply one of the most enjoyable and joyful occasions. 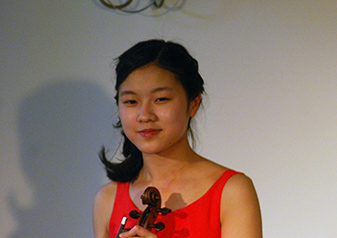 After the concert, the Mayor of Woking, Councillor Derek McCrum, said of the young violinist jokingly, “I don’t think a thirteen-year-old child should be talented like this, but Coco clearly is”.  He continued, “I understand it involves hard work and much training, but it cannot be only that. I feel something that is driving from the deep within”. 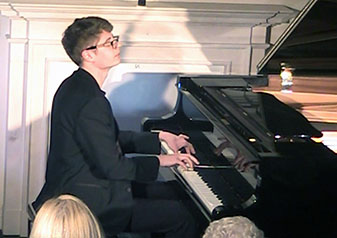 For our end-of-season recital, we welcomed pianist Pavel Kolesnikov. His outstanding musicianship, total command over the performance, and intentional, purposeful programming and interpretation (he says “everything is intentional”) were evidently apparent. However, what left us with a striking and memorable impression was his sound quality and effects. Through them, he was able to convey his message to us in every piece.