Her programme seemed as if it was designed specially for Breinton. Pianist Clare Hammond gave the Breinton audience a perfect musical evening featuring the works of composers  ranging over four centuries.

The programme began with Brahms's transcription of Chaconne, undoubtedly Bach's most masterful and powerful unaccompanied violin composition. Transcribed in this version for the left hand only, it was meant to be a study rather than a concert piece. However as David Mather wrote in the programme note, "while it may properly belong in the practice room, it makes an interesting curio for the concert hall". Exactly right; I think the whole audience was curious and looking forward to hearing this challenging piece of work. The seemingly impossible spread of chords and enlarged harmonies were managed excellently, together with effective pedalling work, and her control over the big leaps covering the wide physical distances was strong. I also enjoyed the beautifully voiced melodies. This transcription is so different from the original Chaconne of course, but it is the one with which you feel the romantic composer Brahms' homage to Bach.

The three pieces from Felix Mendelssohn's Songs without Words were absolutely lovely. No words are needed to describe the beauty of music – full of tenderness and intimacy, it was heart-touching. Clare reached out to the audience through sharing them.

Schubert's 'little' A major Sonata followed. It was serene and dreamy with a hint of melancholy underneath, exactly as Clare described it prior to performing. All the movements were beautiful, but I particularly loved the second movement. I think the succession of beautiful chords were heavenly with a soul cleansing effect.

The second half started with a light hearted Mozart Variation in C; a refreshing breeze for the recital room before moving onto Erik Satie. With Gnossiennes, Clare lead us into a magical, mysterious and atmospherically haunting world which we had not experienced in any of our past recitals. She ticked all the right boxes – the sensitive keyboard touch, perfect volume and pace, well controlled dynamics with suited tones and intuitive interpretation.

Another left-hand piece, Scriabin's Prelude and Nocturne followed. It was incredibly moving; what gorgeous music, so sonorous and lyrical. It lingered and melted into the atmosphere - this nocturnal piece seemed perfect for the warm, peaceful spring evening we had on Saturday.

Danzas Argentinas by Alberto Ginastera, with drastic changes and surprises, drew an exciting finish to this wonderful recital. Three dances, based on the folksongs and rhythms of the composer's native land Argentina brought a complete different side of Clare and her artistic and technical aspect. We enjoyed the spikiness and speed of the first dance Dance of the Old Herdsman, while the second one Dance of the Beautiful Maiden was gentle and mellow. The third, Dance of the Arrogant Cowboy, was wild and attacking, it was so much fun to speculate and listen to.

The encore was Chopin's etude Op. 25 No. 7 "Cello", a gorgeous piece with the prominent melody played in the left hand. Her left hand must need a good rest nowâ€¦â€¦

Clare included two left handed pieces in her programme. Naturally you'd wonder if she was left handed, wouldn't you? The answer is 'No' - she says she just loves these pieces so much. And of course that is the right reason to include them in her repertoire. 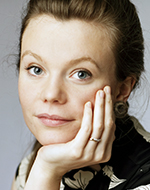 Acclaimed by The Daily Telegraph as a pianist of "amazing power and panache", Clare Hammond has performed across Europe, Russia and Canada and appears regularly at the Wigmore Hall in London, and the Bridgewater Hall in Manchester. Her Purcell Room debut for the Park Lane Group concert series was praised by The Guardian for its "crisp  precision and unflashy intelligence'. A passionate advocate of twentieth and twenty-first century music, Clare combines a formidable technique and virtuosic flair onstage with stylistic integrity and attention to detail.

Over the past concert season, Clare has performed at St George"s Hall Bristol, the Queen"s Hall Edinburgh, and the Bridgewater Hall Manchester. Her Wigmore Hall recital was broadcast by BBC Radio 3 as part of their "Live in Concert" programme, chosen as one of their Classical Highlights for the month and later broadcast on Radio 4 in the Netherlands. Clare released her debut CD of British contemporary piano music in 2012 for Prima Facie Records, and recently appeared on BBC Radio 3"s "In Tune" to promote the disc. In October she visited Radio Ulster to discuss recently discovered pieces by Hamilton Harty of which she gave the world premiere in her inaugural recital as Artist-in-Residence at Queen"s University Belfast, while 2013 opened with a broadcast of six études by Unsuk Chin on BBC Radio 3"s "Hear and Now".

Forthcoming highlights include the premieres of works written especially for Clare by Kenneth Hesketh and Robert Saxton at Cheltenham and the City of London Festivals, performances at the Brighton and Presteigne Festivals, recitals at the Wigmore and Bridgewater Halls, and two BBC broadcasts. Clare has just embarked on a new collaboration with BIS records and will record two discs for them in September 2013: one of the complete solo piano works of Andrzej and Roxanna Panufnik and the other of études by Unsuk Chin, Karol Szymanowski, Nikolai Kapustin and Sergei Lyapunov. An active chamber musician, Clare has worked with Andrew Kennedy, Jennifer Pike, Philippe Graffin, Lawrence Power, Ruth Palmer, Tatiana Berman and the Endellion, Dante and BenaÃ¯m String Quartets. She performs regularly with the flautist Ana de la Vega as the "Duo Dounia", and with the Goldfield Ensemble.

Eager to extend the boundaries of traditional concert life, Clare is intrigued by new perspectives that musicological study can bring to bear on performance. She recently completed a doctorate on twentiethcentury left-hand piano concertos and was convenor for the RMA Study Day Performing Musicology, held at City University London in 2011. Clare will give a series of concerts and workshops at Queen"s University Belfast as part of a residency in 2012/13. She is also in demand as a speaker and has been invited to give presentations at Oxford, Manchester, and Surrey Universities this season. On the concert circuit, Clare enjoys introducing recitals, pre and post concert talks and giving lecture recitals and workshops to audiences of all levels.

Clare completed a BA at Cambridge University, where she obtained a double first in music, and undertook postgraduate study with Ronan O"Hora at the Guildhall School of Music & Drama and with Professor Rhian Samuel at City University London. She has been supported by the Arts and Humanities Research Council, Stradivari Trust, Martin Musical Scholarship Fund, Jessie Wakefield Bursary and the Kenneth Loveland Gift.